So if we believe Plato’s notes on Atlantis, the continent should lie somewhere off the coast-lines of the Atlantic Ocean. However, several hypotheses have tried to connect Eastern Atlantic structures as megalithic buildings, such as chambered tombs or stone monuments. These megalithic builders were characteristic of prehistoric Europe, and the claims of matching buildings in the Atlantic Americas do not uphold under close inspection. Essentially, “there are no America equivalents of the chambered tombs of the stone rings at Stonehenge, Avebury, and Carnac” (James and Thorpe). 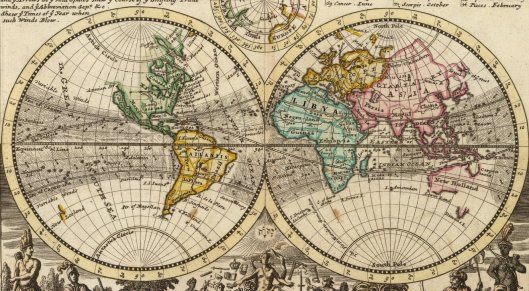 The various geologic claims of Atlantis as a lost continent, in short, are unfounded. The continental drift, in which the world’s one landmass fractured apart—now known as the tectonic plate theory, does not allow room for the Atlantean continent. Recent theories suggest Altantis may have relocated to Antartica, but no evidence exists to support this other than a literal reading of Plato.

Although Plato’s depiction of the lost city was debunked, K.T. Frost, a young Belfast University scholar, suggested that Atlanteans echo the once-flourishing Minoan civilization in Crete: “Egyptian tomb paintings depicting visitors in Minoan-style costume showed that the Egyptians were aware of this civilization, while its sudden disappearance about 1400 B.C., Frost suggested might have given them the impression that ‘the whole kingdom had sunk in the sea’” (James and Thrope). The only drawback was the lack of a big enough catastrophe.

Greek archeologist Spyridon Marinatos theorized that the crater left by the explosion of Thera, a Bronze Age volcanic explosion turned tsunami, left a crater and gave rise to the tale of Altantis’ destruction. His 1967 excavation uncovered streets, houses, and beautiful pottery. This discovery prompted several books in 1969 that argued Thera as the real Atlantis. However, many of the comparisons between the Minoan and Atlantean civilizations were too weak, the explosion of Knossos a decade and a half earlier, and the lack of communication breakdown between Egypt and the Aegean world was not significant to indicate a “sinking” of an island.

Andrew Collins on Atlantis as Crete or Thera

The UnMuseum on Atlantis

The Shadowlands, Atlantis the Lost Continent

Want to read about my version of Atlantis?

Read “Maiden of the Underworld” in my DISTORTED anthology.