What inspired your story?

I’ve lived in New Orleans off and on for over 21 years. It sings to me in a way no other place ever has. When Katrina flooded the Big Easy, my heart broke. Our country’s most unique city, rich with centuries of culture and history, submerged in a few short hours. People begging for rescue atop homes jutting from the murky water—an American Venice, tragic and romantic, flooded the television sets around the world, and I wondered if I’d get home again. Sometimes a place is more than a place, and I began wondering, should the swamp reclaim the area, who—and what—would remain? Would anyone ever come back? One of my best friends lives in Houma, just south of Nola, and she works for one of the local haunted house here, the House of Shock. Her normal character is a voodoo queen, and so I took some cues from that. This story is really a gift to her.

Did you have to do any research? If so, what kind? What did you learn?

Geographical. New Orleans is shaped like a bowl, so some parts of the city are on higher ground than others. Watching videos that recreated the flooding, the fallout, the looting. I examined airboats, how they operated and what not.

Can you tell me a little bit about your protagonist?

He’s an expert airboat pilot. Got a lover back on solid ground, and he hopes these runs will afford him a family. This is his first time raiding the city for supplies, and he’s nervous, but his youth also breeds cockiness.

Tell me about the setting you chose and how it influences your work.

New Orleans is a living, organic monster. She decides who she’ll embrace and who she’ll spit out. Music, drink, crime, culture, food, ghosts, voodoo, murder—it can be a little much for some. The city not only influences my work, but every aspect of my life. It made me the creature I am today and continues shaping my life.

What would you like readers to know about “Diluvium”?

It’s a wasteland story, a smaller piece to a larger world that’s come unhinged. Several other authors are currently chipping away at different regions (and different points in time) of this world—mine just happens to be soggy. Maybe we’ll see all these cataclysmic tales come together someday… 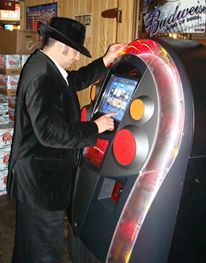 Living and creating in New Orleans, Louisiana, Anthony S. Buoni haunts swamps and bayous along the Gulf of Mexico, writing, editing, producing, and lecturing about his craft. A practicing pagan, he’s responsible for the BETWEEN THERE anthologies as well as his screenplay-novel, CONVERSION PARTY, available through PULPWOOD PRESS. Recently, he’s co-edited and co-produced two exciting anthologies with Alisha Costanzo with their independent imprint, TRANSMUNDANE PRESS: DISTORTED: vol 1 and UNDERWATER: vol 1.

In the past, he produced the underground zine MEOW and the illustrated horror rag OUTRÉ from MEOW PRESS, and his work has appeared in WATERFRONT LIVING, NORTH FLORIDA NOIR, and SMALL HAPPY. Currently writing a New Orleans monster novel as well as putting the final edits on novels featuring ghosts, zombies, and a café between life and death filled with secrets and philosophy. His next book, a collection of dark short stories, is due for publication in early 2016.

When not writing, Anthony is a Bourbon Street bartender and underground musician and DJ, drawing down the moon with new wave, trance, and melancholy tunes. Other interests include film, gardening, comic books, and playing video games with his son, Fallon.