So, if you’ve had a chance to peek at my writing journal, you’ll know that I’ve recently invested more time on plotting elements of my novels and stories via plot embryos, the hero’s journey, and the three-act structure.

I have been a long-time pantser doing little planning other than major scenes that I knew I wanted somewhere relative to each other in a general arc, which is basically saying that I bullshitted my way through most of my writing.

Well, the last novel I wrote, THE GIRL WITH THE GLOWING HAIR, flowed out of me so much faster with a general guide for each of my chapters. I also developed them with a chart and the five-idea method from Rachael Stephen.

This worked so well that I implemented the plot embryos for my shorter works to gauge a general structure.

Then the year ended, and it was time to start my new BLOOD PHOENIX novel, INFERNO. And man, the embryo was a nice start, but I needed more to power through as many words as I really wanted to get through this year (~112,000 words), so I tried my hand at a three-act structure, and here’s what I came up with.

How I plotted BLOOD PHOENIX: INFERNO (some spoilers but no biggies).

Here is where I used the traditional Harmon’s Plot Embryo, below is a comparison of the  my use of the tool. The blue bits are major spoilers.

After I let that marinate for a little while, I created a list of all the plot points I could think of for each act, not worrying about an order. Like this:

This is when I used the three-act structure in a stricter sense, putting those on my list into the act where they belong. At the bottom, I had notes that came from looking at the story arc again and again.

Finally, I made the project its own notebook, listing each act’s plot points down the side before shifting them into appropriate chapters with other details to help me not get stuck between, which is where I typically struggle the most with writer’s block.

So far, this method has allowed me to hammer out 16,000 words last month and another 4,000 this last week with the #100daychallenge or #100dayproject.

But this little book I’ve slapped together has some extras that help me remember character motivations, keep secondary threads going, plan out the past to understand how it affects the present, and after the halfway mark, I’ve started gathering notes for a Broken World guide after requests from readers to explain all of the connections and cross-overs and research that builds the series. 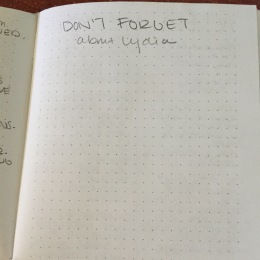 And that’s the process I’ve been using. I’ve found quite a spike in my productivity since I started plotting more and writing more consistently.

I hope you’ve found this helpful, and if you have any suggestions for plotting or writing research, leave them in the comments below so that I can add them to my list!

Also, join me on Instagram or my personal page as I document my journey writing 500 words a day for 100 days!