Goblins are monstrous Medieval creatures with a wide variety of abilities, dispositions, and forms, but they primarily cause trouble for mankind with their mischievous, unpleasant, vengeful, and greedy ways.

The muki live in subterranean caves and are known as miners. From the Central Andes in Bolivia, Peru, Ecuador, and Colombia, the muki remains consistent in its dwarf-like height (no taller than two feet), its brawny and disproportionate body, lack of neck, deep and husky voice, long/bright blonde hair, reddish face with a long white beard, and deep and aggressively hypnotic metallic eyes. Sometimes, he has two horns to break rocks and search out mineral veins. Sometimes, he carries a mining lantern. Sometimes, he has pointy ears.

The muki live in secluded places, and their attacks arouse fear in the local communities, especially as they are known to steal defenseless children. Often, Elders advise using a belt to battle one and not to succumb to fear.

Yet, muki hold great power to help humans they like, making metal veins appear or disappear in a mine, sensing moods and emotions of the surrounding miners, helping their work by softening or hardening veins, and whistling loudly to warn miners of danger. They also make pacts with discreet and honest humans. And several stories tell of capturing these creatures, who often offer to do the miner’s work for some cocoa, alcohol, or a woman’s touch. If the miner reneges their promise, the muki will kill them. 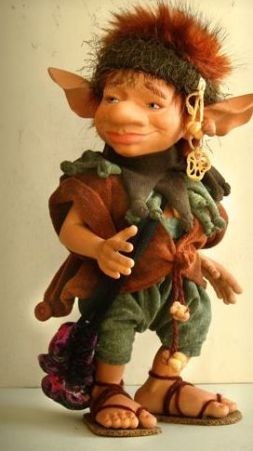 The kobold is a famous German goblin with the versatility of living on ships, in mines, and human homes. They can change their appearance to fit their locale; however, most choose to be ambivalent household spirits—doing chores around the house—or they perform malicious tricks at being slighted. They can materialize as animals, fire, or human, typically taking shape as a small child in homes. Those who live in mines are often hunched and ugly, and those who take up residences on ships smoke pipes and dress as sailors.

Those who live underground were often blamed for cave-ins and rockslides. They favored pranking fool miners into taking worthless ore, mistaking them for rich veins of copper or silver, and when the ore was smelted, it became a noxious pollutant. Miners tried to placate kobolds with gold and silver offerings and respect, but still, sometimes, the kobold returned the favor with cobalt, a poisonous ore thusly named after the creature.

Yet, when treated well, the kobolds could benefit miners, knocking to warn miners not to travel in certain directs and indicating where rich veins of metal could be found—the more knocks, the better mining.

In Finnish mythologies, the hiisi are similar to giants or trolls and are found near striking cliffs, ominous crevasses, large boulders, potholes, woods, hills, and other prominent geographical features or rough terrain. They travel in a noisy procession and attack people who do not get out of their way. They come inside and steal your things when a door is left open. Cultivated areas are the only safe place to hide from a hiisi as they’re seen as sanctified.  Many pre-historic structures and larger stone boulders were thought erected by the hiisi and other giants.

Goblins come in plenty of shapes and flavors, but they all share one thing in common: they prefer being left alone.