Ria has three men in her life, and I know a lot of readers are over the love triangle—or square in this case. I know people are going to react to this. In fact, a reviewer already has: How can Ria love more than one man at the same time? Here’s a disclaimer, the Blood Phoenix mini-series is not a romance. It’s more of a sexy horror/urban fantasy.

Well, let me try to explain this fictional set up and why it reflects a bit of my life and beliefs.

One of my major influences, Laurell K. Hamilton, talks about polyamory in several blog posts and interviews. In fact, here’s a quote from her in a 2015 interview:

“Even in the LGBT community, polyamory and bisexuality are not totally accepted. They are both seen as a way of not committing to one sexuality, or one person, even among those who you would think would be the most accepting. Most people, regardless of their sexual orientation, are very invested in the ideal of finding the love of their life and living happily ever after. It works for some people, but happily ever after is from fairy tales, which are bedtime stories for kids. Why does everyone try to fit real world love into a model from children’s stories? Shouldn’t true love be able to grow up, at last?” 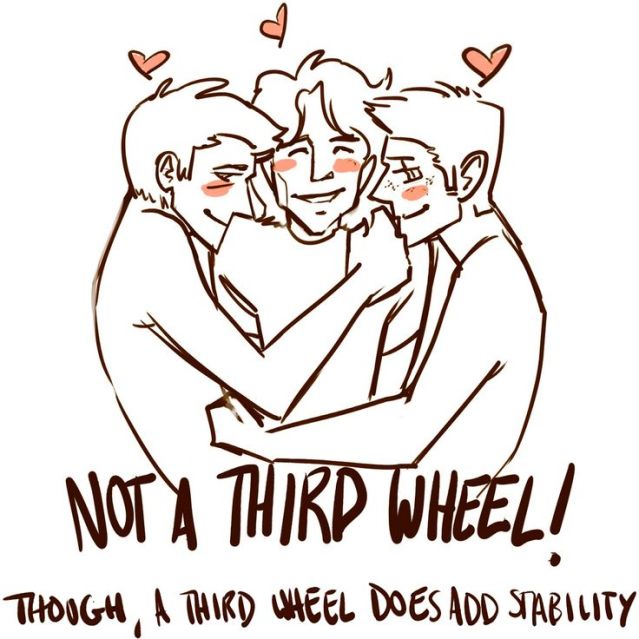 Over the last year, I’ve written, read, edited, and presented over fairy tales and gender roles and societal influences, etc. Her quote fits for my recent state of mind. I highly believe we can love more than one person at a time, and most of us do. We love our significant others, our parents, our siblings, our children, and our friends. Each love is different, even if they’re the same “type” of love.

I feel as though I try to get into the intricacies that comes with polyamorous relationships—as with every relationship, the variables apply to the people involved—that I’ll just say that having multiple partners—sexual or not—can be done in a healthy and respectable way. So long as honesty and open communication exists, more love can only lead to positive outcomes. The same is true with couples.

I’m in favor of combating pre-designated ideas about human behavior. Love who you love and fuck everyone else. It’s none of their business, anyways.

Okay, with that in mind, let me elaborate on Ria’s men and her need for all three. I’ve been told that they could be combined into one or two at most.

They can’t. Maybe this is an author pout, the characters are real to me, and I cannot eliminate one out of the selfish attachment to them. Maybe.

Or they represent the three versions of my husband. Without spilling too much personal information about him, Jason, I will say that the combination of his high intellect, his enormous vault of experiences, and the effects of twenty-six months of extremely active combat in Afghanistan, I don’t always know which version of him I will get on any given day: the surly sergeant determined to fix the corruption of his government—aka James; the needy, silly, goofball that spends a lot of time entertaining himself and causing mischief—aka Boden; or the lonely, sullen man in need of affection and fighting a mouthy, combative female he’s meant to take care of—aka Gene.

The three have a bit of overlap, but they’re distinct enough to make them different people. Besides, Ria needs all the help she can get, and each supports her in different ways as she adapts for each of them.

In any case, my novels are meant to be satirical, poking fun at the tropes of my genre(s), like the ever-popular and overly-used love triangle.

Got a trope you wish more authors used, eliminated, or adapted? Let me know in the comments below!