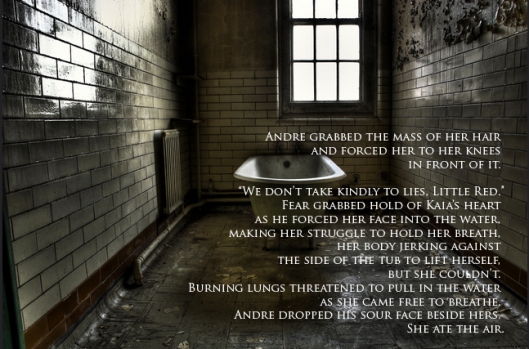 Kaia sat on the side of a bed as a small, dark-featured female sat in a chair across from her, her knees held together, reminding Kaia of Audrey Hepburn from Breakfast at Tiffany’s. Her round eyes condescending yet patient as she looked Kaia over. She took her time, carefully picking every bit of Kaia apart in silence. Fidgeting against her cuffs, adrenaline fought the post-anxiety-attack exhaustion.

The room glowed a gentle yellow, and the springs of the cheap bed creaked under she minute shifting. Finally, their gazes met.

“Two years ago, I watched my mate get his head torn off by a bear. His teeth…” Suppressed rage hastened her breath, “sliced right into his throat…and snapped his body in two. I didn’t believe it possible until that beast spit my lover’s head out and it rolled towards me.” Unfettered lust for revenge brightened her eyes, making them grow impossibly wider.

Kaia couldn’t create the image this woman painted. “I’m sorry. Who are you? If you want my family’s money, they’ll give it, but we’re not excessively rich.”

“I do not want your silly money. The male who killed my lover is what I want.” Rigid, gloved fingers squeezed together in her lap, shaking as if she held a snarling beast on a chain. She took a breath and layered on composure. “And you may call me Scarlet. Fitting, I would think.”

Quite. But not her real name. Dev called her Little Red from the moment they’d met, charming her with his flirtatious humor—the same humor the man captured with her had. They both seemed like such good men, in their presence and actions. Kaia had been wrong enough about the bear, and certainly, she needed no more proof that she was wrong about Sev.

“I can’t give you what you want.” Just the same, Dev didn’t deserve to die because he couldn’t love her enough. Not that she had much information for them, other than broken bits she kept sweeping away, left over from their relationship.

“You can and will by the time we’re through with you. Hopefully, before I lose my patience. I’d hate to mar that perfect skin of yours.” Scarlet straightened her gloves, up around her elbows like the thought of dirtying them with violence set her further on edge. “Why don’t I tell you the whole story? It might give you a smidgen of perspective.

“Two-and-a-half years ago, the bear made contact with Travelers, a mix of Irish and Asian decent, roaming the European and Asian landmass since long before they were called such, as they made their first pass through the Midwest. They’d formed a traveling circus when bartering fell out of favor. The bear weaseled his way into the group, coercing younger members to reform, like those Jehovah’s Witnesses.

“Half of the Travelers pledged to work with humans, to mean them no harm, to hide themselves in passivity. Unrest nestled its way into the pack, splitting families apart and breaking traditions.”

Scarlet pressed her hands into her knees, thumbing away invisible dirt. An ache started in Kaia’s shoulders, making her stretch in the break. This woman had real issues with change it seemed, something raised in Kaia that she had embraced whole-heartedly.

“When trust breaks down, peace becomes a scarce commodity and violence takes its place. Six months after that bear befriended the Travelers, the first death to their people occurred. A young feline murdered his father. Both sides were at each other’s throats, screaming and reaching for blood.

“Daniel, my lover, was called to come placate both sides, but we were not the only ones summoned. And neither side could compromise, especially not with that bear preaching about ethical treatment and ultimate elimination. He killed so many of us. And so many children died.” Scarlet shook her head, bringing her gloved finger to catch a tear before it smeared her mascara. Blinking it away, she took a breath and settled her gaze to her lap. After a few silent moments, she worked at peeling her right glove down her arm, pulling it from her fingertips to reveal dipped and discolored flesh, red and raw looking, mangled like a horse’s leg after a cougar attack. Her arm healed, although unlike the rest of her dark, creamy skin. “When he was done with my Daniel, he tried to take my arm, too. Your bear did this to me.”

The glove wrinkled in her hand, and she slammed her fist into her thigh, her voice soft and scary, whispering a curse. Her outburst subdued, and Scarlet slid the glove back in place. “So, tell me, Little Red, when is the last time you talked to your sweet Devere?”

“I haven’t talked to him since he broke my heart. Why would I want to?” Did they expect her to merely give up the man she loved? This woman needed to do more than tell her a story skewed by the hatred of equality and cooperation with humans. Dev didn’t tell her a lot about what he was and what he did, but Kaia learned enough by observation. And this Scarlet, as the bear would put it, wouldn’t be alive if he wanted her dead. He had a strict no women or children rule unless he had no other choice.

“Andre.” Scarlet rose a hand, signaling Ponytail forward to grab Kaia by the arm and pull her off the small bed to a corner of the room where a tub sat, filled with water.

Andre grabbed the mass of her hair and forced her to her knees in front of it. “We don’t take kindly to lies, Little Red.”

Fear grabbed Kaia’s heart as he forced her face into the water, making her struggle to hold her breath, her body jerking against the side of the tub, unable to lift herself. Burning lungs threatened to pull in the water as she came free to breathe. Andre dropped his sour face beside hers. She ate the air.

“You called him after I attacked you. Predictable.” He gave her a deviant grin before pushing her face back into the cold water. 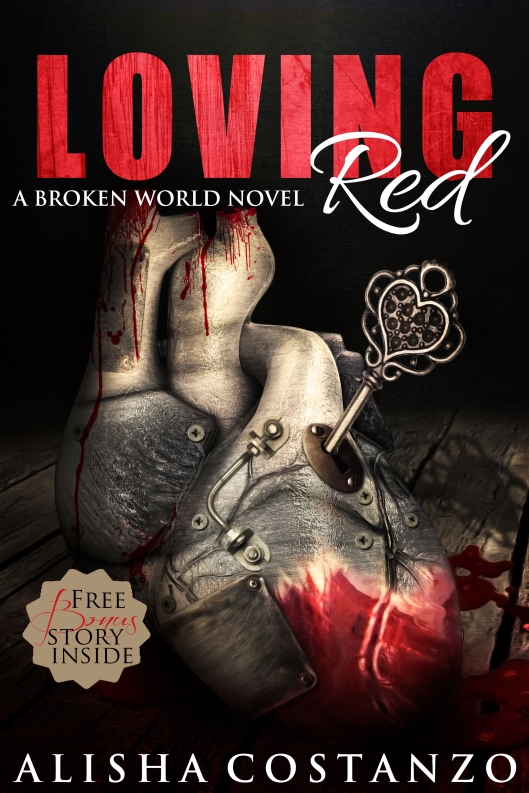 Learn more about the gypsies/travelers in my Did You Know… post.

1 thought on “Excerpt from Chapter Nine of LOVING RED”