The Mexican vampire can be traced back to the Mayans or present day Guatemala but also reached to the Yucatan peninsula.  The Mayan mythology incorporated the vampire bat under the fierce cave god of the underworld, Camazotz, known for his appearances in the Popol Vol and Mayan art.  He was a popularly feared bloothirsty figure among the Mayans with his sharp nose and large teeth and claws—portraying him as a manbat creature.

North of the Mayans, the Aztecs created several vampire deities beyond the lord of the underworld, who appeared to devour souls.  Nevertheless, the goddesses related to the “earthy lady,” Tlaltecuhtli, were considered vampirelike figures.  Tlalteuctli produced terror in her victims, although she was never depicted as a woman. She was, however, show as a huge toad with blood covered jaws, and several females surrounded her and shared a common hideousness and thirst for blood.  The women were: Coalticue, “serpent skirt,” a black, dirty, disheveled, and ugly creature; Cihuacoatl, “snake woman”; Itzapapalotl, “obsidian knife butterfly (a vampire-like creature depicted in Laurell K. Hamilton’s Obsidian Butterfly); and the cihuateteo. 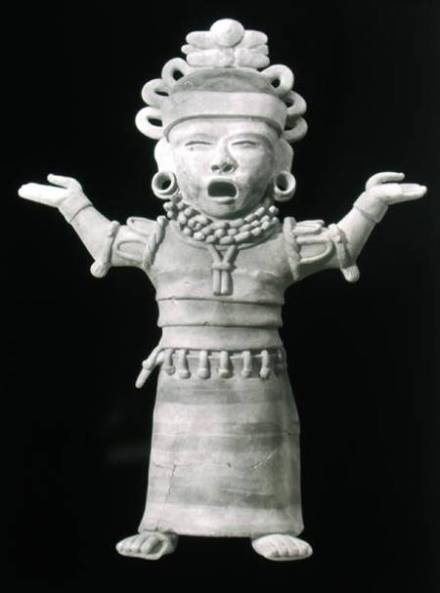 The cihuateteo were the most vampiric of all the Aztec deities, originating from women who died during childbirth.  Due to their strength and struggle during childbirth, typically until both the woman and child died in childbirth, these vampiric women attained the status of warriors.  They wandered the night and attacked children, leaving them paralyzed or otherwise diseased.  In order to keep the cihuateteo from their children, villagers would make food offerings at crossroads in structures dedicated to the vampire deities so that the creatures would gorge themselves instead of attacking the children.  Also, if they remained until morning, the sunlight would kill them.  Recently, the cihuateteo have been depicted as having white faces and chalk-covered arms and hands, much like the Tlazolteol, the goddess of all sorcery, lust, and evil.

Here’s one link and another

1 thought on “Did You Know…About the Mexican Vampire?”